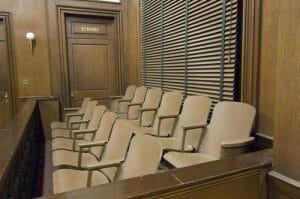 {Read in 8 minutes} To start with, the title of this article is misleading: it is my clumsy attempt at a pun on the famous movie about the way a jury decides a criminal case called Twelve Angry Men. Why am I bringing this up and making sloppy puns here in my blog? Because I wanted to talk a little bit about the role of the jury in a Will contest. As a litigator (attorney who litigates disputes in Court), the mindset of a jury is of tantamount importance to me.

I’ve blogged before about Will contests and the role of the Court in determining whether or not to admit a Will to probate; however, when a Will contest isn’t resolved by settlement or motion practice, ultimately it’s the jury who decides whether the document offered for probate is actually a Will.

These six people determine, among other things, all the crucial factual issues (1) whether or not the deceased actually signed the documents and (2) if he or she understood what he or she was signing, and (3) whether or not the document was the product of fraud or undue influence of one party (usually the person who’s the biggest beneficiary of the Will). Therefore, I thought it would be helpful to talk about what a jury thinks about Wills.

I very recently got to experience this first hand in June 2017. One of my probate contests went to a jury. I was representing several family members who claimed that the Will was invalid for a variety of reasons. My opposing counsel represented the person named in the Will as both the Executor and the sole beneficiary. The two of us had to pick a jury in Brooklyn.

How does that work? Well, the jury clerk brought 20 randomly-selected people from a pool of hundreds of jurors available that day. All of them shuffled into a small, windowless room in the bowels of the Courthouse. They were a cross section of the diversity that is Brooklyn: young, middle-aged, and older; working people, students, and retirees; rich and poor; all different races, ethnic backgrounds, and religious beliefs. And they all had some preconceived notions about how a jury should determine whether or not a Will was valid.

As attorneys, my opposing counsel and I had the task of interviewing them and selecting those whom we felt would be the most sympathetic to our respective arguments. What did I learn from this experience? Well, I learned four things:

– Jurors love family drama. Unlike most cases, where you have jurors willing to say just about anything to avoid being selected for a jury, everyone seemed to really want to be picked for our jury. Out of our 20 potential jurors, only one of them sought to be excused right away. Everyone else was not only interested in the concept of deciding whether or not a Will was valid, but they were really interested in hearing why. Why were these family members not talking to each other? What was really happening, and who did what?

– People bring their own baggage. A lot of jurors, without even knowing the parties or the facts of the case, had an opinion about how a deceased should divide his or her assets. For example, many of them felt that no matter what, all family members should split assets equally. However, many of them felt that writing a Will was a matter of personal choice: the deceased, so long as he or she was competent, could leave their assets to anyone that they wished. Why is this interesting to me as a litigator? Because that’s how I could tell which people were going into the situation already believing that one side is right before even hearing the facts. While a juror’s mind might (and should) change upon hearing the facts and receiving instructions from the Judge, litigators pay keen attention to any potential advantage when selecting jurors.

– Jurors want to know why beneficiaries were included or excluded. It was very interesting to hear the potential jurors give their thoughts on why a family member might be the largest beneficiary of the Will. There were some who expressed that any family member who was the sole beneficiary of a Will was exerting some sort of pressure or undue influence upon the deceased, in order to insert himself or herself as the primary beneficiary. At the same time, many others felt that a family member who is the primary caretaker for an older deceased should receive a proportionately larger share of the Estate.

Why is this interesting to me? So many of my estate planning clients are curious as to why I draft so many questions about who they choose to include and exclude when drafting their Wills. For example, a client may come in to talk to me and tell me that he wants to leave everything to one adult daughter and exclude other children because the daughter is the primary caregiver. She arranges his doctor’s appointments. She makes sure that there’s groceries in the house, and allows and assists him to live independently in his own home. However, dad may be concerned that leaving everything to her will cause a Will contest with her siblings, claiming that she orchestrated the terms of the Will. That may be a valid concern. A good Trusts & Estates attorney takes copious notes about this so the attorney can testify capably should a Will contest subsequently arise.

Why do I tell this story here? Because very often clients come in with a variety of English language abilities. I generally try to think, how is this going to look before a jury? (Again, this is the litigator in me). What have I done in these situations? First, one of the benefits of being in New York is that there are more attorneys here than there are cockroaches, and many of them speak different languages fluently. My first inclination is always to send the client to an attorney who is fluent in the client’s native language-even if it means I’m losing some business. (I’d much rather be an ethical attorney than a rich one.) By the way, did I just compare myself to a cockroach?

Another thing that can happen is that the attorney can retain an interpreter. I did this once for a Spanish-speaking client who insisted on my services, and who spoke pretty good English. Given the size of her assets and the likelihood of a Will contest, my firm hired a Spanish interpreter for two days. First the day I met her, to determine what the Will should say. Second, the day that she signed the Will. We created a record of what was said so that if anyone challenges her Will, I can testify that there was an English-to-Spanish interpreter present, allowing her to fully understand what she was signing.

Moral of this story, if language is an issue, find a lawyer who speaks your language. There are lots of them.

How do I protect my clients from claims of undue influence when there is a language issue or someone tries to make the appointment on their behalf? When clients come to me with these sorts of concerns, I always tell them that I want to speak to the person making the Will themselves, and not the family, friends, or other potential beneficiaries. In fact, I never want to meet these people. I don’t want any potential beneficiary to have any input into the sacred attorney/client relationship that I have with my client.

This isn’t because I’m being rude or dismissive (really – I am a wonderful person!), it’s to protect both the client and the beneficiaries. It protects the client because if his or her wishes are legitimately to favor only this one beneficiary, it’s much more likely that the Court will uphold the Will if I, as the attorney who wrote it, can testify about how this was my client’s own, independent decision based on conversations I had with my client. It also protects the beneficiary, because if he or she is not here in the room, or communicating with me in any way, it makes it a lot less likely to a jury that the beneficiary influenced the drafting process — and much more likely that the Court can dismiss a probate challenge more quickly.

In conclusion, I always, always tell clients that they should critically examine whether or not a probate contest is likely. Just simply saying, “Oh, they love me more than they love my money,” may or may not be realistic here. It’s a very essential conversation to have with your lawyer. If there’s a Will contest, the lawyer who wrote your Will is going to be the primary and best witness to make sure that your wishes are upheld. Hence, there is some benefit to hiring a litigator to write your Wills. For more information on the subject, contact me.