What Happens at a Deposition? 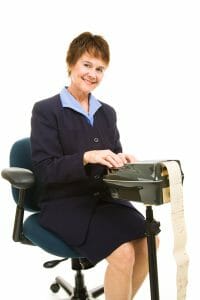 Ultimately, all of these matters may be heard at a court hearing or trial. Lawyers spend a good deal of time preparing for that trial, and one of the most common tools they use is an examination before trial (EBT), or as it’s commonly known, a deposition. I thought that we might spend some time talking about what happens at a deposition, and for those readers who have upcoming plans to attend one — either as a witness or an observer — let you know what you might expect.

At certain times during the course of a contested proceeding, parties are entitled to gather information to prepare for trial. They are entitled to request and receive copies of documents, get answers to written statements, and take the testimony of several parties and witnesses prior to the trial/hearing in order to be fully prepared. This practice is known as discovery, and in the United States we have a very liberal system of discovery. Why? Well the answer is two-fold.

– We want to ensure that by the time the matter is set down for a trial before a judge or a jury, everyone is fully ready to proceed and we won’t need to start and stop — much to the great inconvenience of all involved. Whether a trial takes one afternoon or six weeks, it’s nice to complete it several days in a row and have a verdict at the conclusion.

– We want to make all parties aware of the strengths and weaknesses of their own cases as well as their opponents’. Think of it as playing a game of cards where you and your opponent have all of your cards face-up on the table so each of you know exactly what is in the other’s hand. Maybe your hand is no longer as strong as you thought it was, or perhaps you see evidence that reasonable minds could interpret differently. What’s likely to happen? You’re more likely to settle, which happens in a fair number of cases.

Depositions are an incredibly popular discovery tool. Unlike courtroom testimony, a deposition occurs outside the presence of the judge; sometimes in a separate room of the courthouse, but most often in an attorney’s office. The attorneys are present, and the parties may or may not be present as well. The witness(es) from whom any party seeks testimony will be present, as will a court stenographer or reporter, whose job it is to take down everything that is said. During the deposition, the questioning attorney may ask the witness anything related to the case before the Court.

For example, in a case to remove an Executor and revoke their Letters, the attorney may ask questions of that Executor designed to see whether or not they have been faithfully and fully discharging their duties as a fiduciary. In a contested accounting proceeding, the attorney may ask the fiduciary to detail any expenses that they have paid maintaining the estate assets.

In a probate proceeding, the scope of the questioning is a little more limited — usually to a time period from three years before the date a person signed a Will to two years after the date of the Will (unless the person died during that time, at which point, the time period would terminate on the date of death).

At the conclusion of the deposition, the court reporter will produce a transcript of everything that was asked and answered that day. This can be incredibly helpful to an attorney in trying to settle the case or moving the Court. It is also helpful when making motions to the Court to dismiss or declare one party the winner, without the need for a trial.

Certainly, if the matter does go to trial, the parties’ testimony should be consistent between the deposition and at the trial. If it is not, the cross-examining attorney may use that party’s deposition transcript to call the witness’ credibility into question.

If you are about to go into a deposition as a witness, it is important that you speak to your attorney, especially if you are a party to the dispute. A meeting with an attorney before your deposition will help prepare you for the types of questions that you are going to be asked, and help you prepare the best way to answer those questions. Most attorneys should give you transcripts of other depositions they have conducted so you can see detailed examples of questions you might expect.

While a witness is always obligated to tell the truth when under oath, generally an attorney will tell you that you want to keep your answers short and responsive, and not volunteer additional information that goes beyond the scope of the question. Similarly, most attorneys do not want you to guess. If you do not know the answer, you should say that you don’t know, and if you used to know, but no longer recall it, you should simply say so rather than something like, “Well, I’m not sure, but I think that maybe …” After all, this is something that could potentially be used to support or hinder your case later.

If you have any questions about depositions, or for more information, please contact me.