Power of Attorney: What You Need to Know 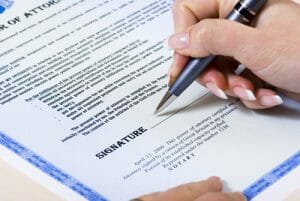 {Read in 8 minutes} Whether a client needs a Power of Attorney is one of the most frequent questions I get. Perhaps you’ve considered signing one yourself. I’d like to spend some time today discussing (1) what a Power of Attorney is, (2) what it allows someone to do for you, (3) what it doesn’t allow someone to do for you, and (4) some of the concerns that you should consider before executing one.

A Power of Attorney is a document whereby the person who signs the document (called the Principal) appoints someone to manage his or her decisions (called an Agent, and sometimes also referred to as an Attorney-in-Fact). The Agent is able to do anything that the Principal is able to do himself, such as (1) banking transactions; (2) brokerage transactions; (3) renewing leases on apartments; and (4) buying and selling real property.

It is important to note that, despite granting these powers to the Agent, the Principal never loses the power to do them for himself. I always tell clients to think of signing a Power of Attorney as cloning yourself: you retain the power to do all of these things and your clone (here your Agent) can also do the same things.

Why would someone want to sign a Power of Attorney? Most people consider it a document that someone will use toward the end of life, specifically if they lose the capacity to manage their finances on their own—but a Power of Attorney is also fantastic if you need to rely on someone to help monitor your finances.

In fact, there are many examples in which someone might appoint an Agent to manage their assets. People who are traveling abroad for long periods of time, people who are incarcerated, or people who simply want to appoint a qualified professional (such as a bookkeeper or a trusted administrative assistant) to handle their affairs can all benefit from having a Power of Attorney.

However, even though you’re giving the Agent all of these powers which are very broad, there are certain things that your Agent is not allowed to do for you:

-The Agent is not allowed to make gifts of your assets unless you have modified the default form by adding a Statutory Gifts Rider. Normally a person makes gifts of his assets in his Will, which transfer upon his eventual death. The Agent’s job is to maintain the Principal during his lifetime. However, there are some situations in which a Principal might want an Agent to make gifts of his assets.

For example, an Agent wouldn’t be able to lend himself money. It is also forbidden for the Agent to use the Principal’s money to invest in the Agent’s business, nor would the Agent be able to make gifts of the Principal’s assets to himself—unless there were specific provisions or riders to the document that the Principal defines to be in his best interest.

–In the 2009-2010 legislative session, the New York State Legislature amended the form so as to require the Agent to sign a very specific statement about what the Agent is, and is not, allowed to do. This means that if the Agent is breaking these rules, he is potentially breaking the law, and the District Attorney’s office will prosecute people who do this. Many of you may remember Brooke Astor’s son facing criminal charges for this about 10 years ago. The increased likelihood of criminal prosecution offers some comfort to most Principals.

At this juncture, I want to address some specific concerns about Powers of Attorney. Many people are wary about signing them, because they are afraid of abuse. I agree that this is a legitimate concern. You should only sign a Power of Attorney if you have an Agent whom you trust implicitly. Otherwise, you could be setting yourself up for some real financial troubles. However, most people have others in their lives who they would trust to manage their assets – spouses, adult children, trusted friends, etc.—that the Principal trusts beyond reproach.

It’s interesting to note that when signing a Power of Attorney, the Principal has to make a choice. Does the Agent have the power to act immediately upon the Principal’s behalf or must the Agent wait for the Principal to experience some sort of incapacitating event in order to act? Most people prefer the latter, however—and this is counterintuitive—I strongly encourage the former.

Visiting me at the hospital, you try to corner my doctor and get her to write a statement stating that I am unable to manage my finances in order to satisfy my bank. This may be difficult to do simply on logistics. Doctors in hospitals are exceedingly busy people, and sometimes it is very difficult for them to tear themselves away from their rounds to write such a letter. On top of that, the hospital’s legal department might also need to review this document before the doctor can turn it over to you, thus creating further delays.

Another problem that you may have with the letter is a Federal law called the Health Insurance Portability and Accountability Act (commonly known as HIPAA), which is a law that protects people and their “individually identifiable health information or medical information.” This means that doctors could be running afoul of Federal law if they give information to people who are not otherwise entitled to it. If you are not a spouse or a child, but rather a good friend or a colleague, your efforts may be stopped in their tracks by HIPAA.

Continuing the same hypothetical, let’s say you actually get the letter and you go back to my bank. What’s the banker going to do? The banker’s going to send that letter off to the legal department, and you will get a response that the letter is acceptable or not acceptable. I’ve heard banks reject letters like this for a variety of reasons, such as “The letter only says that Tom had a stroke, not that he is incapacitated,” or “Saying he is incapacitated doesn’t mean that he is unable to manage his finances.” So you may have to start the circuit all over again by getting back to my doctor, getting her to write another letter, having the hospital’s legal department approve it, and taking it to the bank once more. And that’s not the end of it. There are some banks—particularly some of the larger banks—that will require a new letter every four to six months on the thought that if I were to regain capacity after my stroke, the Agent’s power to act would cease.

For this reason, I always recommend that people sign a document that is effective immediately upon the signing. This means that the Agent will never have to explain anything about my capacity to a bank when they go to use it. It completely cuts the middleman out of this process. However, for people who want to make sure that their Agents are not acting until they absolutely need them to, what options do they have?

First they can have a conversation with the Agent when handing them the document stating, “Please respect my wishes and do not take any steps until you’ve determined that I’m unable to do them myself.”

Second, they could not give the Agent the document when they sign it, but rather tell the Agent where they could find such a document if they ever need it. For example, I name you as my Agent under my Power of Attorney. You are a good friend and you have keys to my home. I tell you that if you ever need to take care of me, all of the documents that you need are in the middle drawer of my desk. That way, you know that somewhere there is an envelope containing documents such as a Power of Attorney or a Health Care Proxy or a Will. So long as I’m comfortable with this arrangement, that works well for me.

Third and finally, I can name you as my Agent and simply not give you the form. I can give it to someone else to hold on your behalf. Example: I give the form to my sister now, and I tell her that I have appointed you, my reader, as Agent under my Power of Attorney. I tell my sister that if there ever comes a time when she determines that I am incapacitated and unable to manage my finances, then she should give you the documents. By doing that,  I’ve created a situation where I’ve signed a Power of Attorney that’s effective immediately, but because you don’t have any access to the document, you cannot act at all. Instead I’ve added a third party to the equation to be the arbitrator of whether or not I’m incapacitated. That means no medical explanation for the bank is needed. This is attractive to a lot of clients.

On a closing note, I always do encourage clients that are willing and have people in their life that they trust implicitly to sign a Power of Attorney. If they do not, and if they lose their capacity and ability to transact financially when it is needed, the only other choice would be to commence a Guardianship proceeding. As I’ve written, no one wants that.