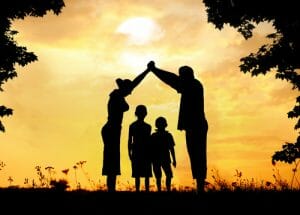 {Read in 5 minutes}  I bet that title caught your attention, didn’t it? I’m always pleased when people actually click on the links to my blog, and I guess I’m not above using a scandalous title to catch your attention.

So what are we talking about in this blog article? Non-marital children. Very rarely do you ever hear anyone use the term bastards anymore (and frankly, I wouldn’t have either if I didn’t want to catch your attention). But, now that you’re here – keep reading!

Non-marital children are becoming more and more common.It used to be that having and raising children occurred almost exclusively within the context of marriage. Nowadays, in my practice, I see many people of all races, sexual orientations, and socio-economic status making a conscious choice to not get married, but still raising a traditional nuclear family. This creates certain issues for the unmarried couples, who may not enjoy the rights of spouses. Non-marital children also create special legal issues, which I will address here.

New York law is sort of interesting in that it treats a non-marital child differently depending upon whether or not we are looking at the relationship of that child to a deceased mother or a deceased father. For example, New York law presumes that a non-marital child is the actual biological child of a deceased mother, but New York law imposes a burden upon that child to prove that they are actually the biological child of a deceased father. Traditionally, a lot of this is simple biology, but as more and more methods become available for parenting children these rules are somewhat outdated. In a surprise to absolutely nobody, the law is one of the last areas to catch up to technology.

Why may it be important to prove this relationship? This can be incredibly important when someone dies intestate or if they need to prove kinship in order to make a claim to the Estate in an accounting proceeding or if they are looking for the legal ability to object to a Will or have standing to receive Letters of Administration to be the fiduciary of an Estate when someone died without a Will.

So how do they meet this burden of proof? Well, there really are a number of ways:

If a Court has ruled during the lifetime of the father that he is the biological father of the children in question, that ruling is binding on the Surrogate’s Court. This may have come up in a paternity or child support proceeding brought years earlier when these children were minors, even though they may now be adults. Once any Court makes a paternity ruling, it is almost always binding upon all other Courts and legal proceedings.

During his lifetime, the father can acknowledge paternity in a variety of ways:

– Perhaps the father is listed on the birth certificate, which is something that requires the father’s consent. This is an official government document that is strong evidence of paternity to most Courts.

– Perhaps the father has signed some papers acknowledging the paternity of the child. In my own practice, I often prepare statements where fathers of children born out-of-wedlock can appear before a Notary Public and acknowledge paternity. This can greatly alleviate the burden on the child after the father dies and save considerable time and legal fees.

The child can present clear and convincing evidence that the deceased is their father, either by:

– Producing a genetic marker test, also known as a paternity test, or as I like to call it “The Legal Homage to Maury Povich,” or

– During his lifetime, the father openly and notoriously acknowledged the child as his own. In this instance, signing legal papers acknowledging paternity is not required. Here, the Court will scrutinize people’s behaviors to determine whether the deceased father considered the child his own. Some ways to establish open and notorious acknowledgement:

– Did the father have photographs of the child in his home, office or social media sites?

– Did the father introduce the child saying “This is my son/my daughter?”

– Did the father walk the child down the aisle as she or he was getting married?

When writing a Will, it’s important that a client tell the attorney if they have non-marital children. A lot of legal fees and aggravation can be saved simply by directing the lawyer to draft a document acknowledging paternity of the child. This is a simple element as part of a comprehensive estate plan.