The Young Heir: Minors as Beneficiaries 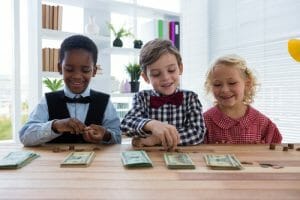 {Read in 7 minutes}  Guess what? One of the most common concerns parents have when creating an estate plan is what happens to their children. Very often, they are concerned with the practical things, such as who would become the Guardian of their minor children should both of the parents die before the child reaches the age of majority (18). However, there’s another practical concern. What about the cash?

In previous entries of this blog, I’ve talked a little bit about different types of Trusts, and about setting up a Trust for a child’s benefit. What happens in the absence of a plan? Are there ways that a minor (from infant to teenageer) might come into money upon the passing of a loved one? This may happen more often than you realize, and in a couple of different ways:

– A parent may die intestate. In that case, even if the deceased parent has a surviving spouse, the minor may come into money. In general, our laws in New York allow an Executor or an Administrator to pay a cash sum of up to $10,000 to a child’s parents.

– Someone creates a Will, in which they name the minor as a beneficiary without providing any instruction on how to hold the money until the minor has reached the age of majority. Again, the Executor may deliver up to $10,000.00 to a child’s parents.

– This is the most common occurrence: When completing a beneficiary designation form for life insurance or retirement accounts, the parents (or perhaps a grandparent or someone else entirely) has left money directly to a child. If the insured party or the holder of the retirement account dies and the beneficiaries are still minors, there is sometimes a problem if the payout exceeds $10,000.00.

What happens in these situations? The first thing that happens is that the Surrogate’s Court needs to appoint some party as the child’s legal Guardian — even if that child has a living parent!

Shocking? Many assume that a surviving parent is automatically their child’s Guardian, and that is true to some extent. They are what’s known as their child’s natural Guardian, and can do things like make medical decisions, add them to health insurance, enroll them in school, etc. However, they lack the authority to hold a significant amount of cash on behalf of their own child absent a Court Order naming them as legal Guardian.

In a situation where a minor child inherits money due to the deaths of both parents in a common accident, or in unrelated deaths years apart, or when a single parent dies: how does the Court determine who to appoint as the child’s guardian?

If the parents created a Will, it is the person named in the Will. If not, certain family members are entitled to apply for Guardianship. Whether or not these family members are the people whom the parents themselves would have chosen is always an issue, and one of the things young parents should consider in determining whether or not to write a Will. The Court would issue Letters of Guardianship to the person that the Court appoints.

By the way, this is a relatively easy process. Most parents will go to the Surrogate’s Court even without an attorney and use the Court’s fill-in-the-blank forms.

What happens once the Court appoints a Guardian?

Another thing that parents should be aware of is that the Court retains supervisory powers over all of the funds, often requiring that the Guardian open all bank accounts titled in such a way that they are held jointly between the Guardian and the Clerk of the Surrogate’s Court.

As a practical matter, this means that the Guardian will need the permission of the Court to withdraw funds. Why? The Surrogate’s Court tries diligently to preserve as much of the assets as possible for the benefit of the minor child so that, upon attaining the age of majority, the child gets all of the inherited funds, plus interest. When making a request to withdraw funds, the Court would want to know why the withdrawal is necessary.

For example, if I am the Guardian of the property of my own minor child, the Court would want to know why I am asking to spend my child’s money for his expenses instead of my own — especially because I am a parent and I owe my child a legal obligation of support. If I have the means to pay but I would prefer to save my own money while spending my child’s, the Court would likely deny my application. If I did not have sufficient funds to cover the expense and the requested item(s) are in the child’s best interests, the Court would likely grant the application.

While these sorts of proceedings can seem insurmountable, they are not. The Surrogate’s Court staff and the judges themselves will often try very hard to work with families to do what is best for the child.

For more information on this topic — whether you are a parent considering writing an estate plan, or the parent or family member of a child who’s inherited some money — please contact me here.