Discovery and Turnover Proceedings: How To Get Stolen Assets Back into the Estate 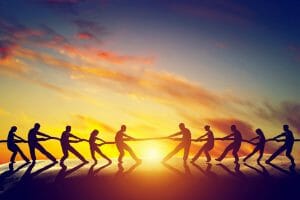 {Read in 4 minutes}  Despite the popular saying, possession is not nine-tenths of the law. Just because I possess property that does not belong to me usually does not give me rights superior to those of its actual owner. However, it may create an illusion that I am the actual owner of the item — an illusion that leads others to believe that it is actually mine. But the true owner knows the truth. What happens, however, when the true owner is deceased and can no longer make a claim of ownership?

Welcome to my world, and a typical litigation problem in an Estate. Here’s an example of how something like this may play out: there is a beloved family heirloom that was in a deceased’s home when he died and is now hanging on the wall of his daughter’s apartment. Or perhaps there were $100,000 worth of marketable securities in a brokerage account over which his son held a Power of Attorney — which was transferred to the son’s personal brokerage account four weeks before the deceased died. In either of these instances, the person possessing these items may claim that they were a gift (although it may be harder in the Power of Attorney example. As I explain here, New York law requires that there be sufficient evidence of an intent to make a gift, including a gift to oneself, for it to be valid).

What is an Executor or Administrator to do in these circumstances? All that the Executor/Administrator has is the self-interested statement of the person in possession of the item(s) that the deceased gifted to them before they died. The deceased, now being dead, is not a reliable source of information unless we are going to have some sort of dispositive séance concerning what really happened.

In general, our rules of evidence in New York State preclude a person from testifying about a self-interested transaction at a trial. While attorneys can generally get information and statements at depositions prior to trial, again, it may not be entirely conclusive. At the end of the day, the Executor/Administrator is faced with having to account to the beneficiaries, who may dispute the fact that the Estate’s assets don’t include these items and may even suggest that the Executor/Administrator breached their fiduciary duty by failing to recover it, or even stealing the assets themselves.

So what’s the answer? The answer is a Discovery & Turnover Proceeding, which is a statutory proceeding that the Surrogate’s Court may entertain under such circumstances.

The Executor/Administrator would make an allegation that somebody is in possession of property belonging to the Estate. The Surrogate’s Court would issue a Citation directing that party to show cause before the Court as to why the Court should not direct that they return it to the Estate.

In situations where the items are likely to be jeopardized, such as tangible personal property that may be lost or real property that might be sold, the court can issue a temporary restraining order preventing the party in possession from doing anything that would diminish the estate’s interest in the assets pending a full hearing on the matter.

Those Executors/Administrators wishing to bring such a proceeding, which is a little bit more complicated than your garden variety probate or administration proceedings, and also, parties who are in possession of items that receive Surrogate’s Court notices to defend why they are in possession of these items, would be well-served by having an attorney with them in this proceeding.