With Apologies to Jessica Fletcher… 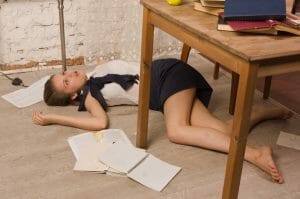 {Read in 6 minutes}  As an attorney, one of the most frustrating things that I do is watch television shows portraying other attorneys. In a surprise to perhaps absolutely nobody, television does not always accurately portray what happens in a legal setting, either in a law firm or in the courts. I thought I might take a minute to let you know my own take, as a Trust and Estates attorney, on what I see related to Wills and Estates on television versus what the realities are under New York State law. Here are three common examples that drive me absolutely ape shit.

There is no “reading of the Will.”

It makes for great television — a bereaved family fresh from the funeral, all dressed in black trying to retain their composure in some attorney’s office as the attorney reads aloud from the decedent’s Will. People in tears because they are in mourning… or maybe because they don’t like what the Will says! Predictable gasps and moans, and maybe — if it’s a bad 80s Dynasty-like show — some good-natured open-handed slapping.

Again, makes for fantastic television. Never, ever happens in real life. Not ever. Nope, nada, sorry ‘bout it.

When one dies in New York State, the Executor nominated under the Will files papers with the Surrogate’s Court seeking to admit the decedent’s Will to probate. While ultimately all of the beneficiaries and interested parties will see a copy of the Will, this copy from the Court often comes by mail or sometimes by process server along with a Court-issued Citation. People prefer avoiding the “reading of the Will” because (a) it avoids in-person blow ups with anyone who is tremendously upset by the contents of the Will; and (b) it prevents people from forming grudges that will result in decades of family strife rather than confronting each other face-to-face and resolving things in a healthy way (that may be optimistic, but it does happen!). Or perhaps, it might even lead to a Will contest.

Of course, I’m being a little bit cheeky here. Not every Will bequest is controversial because the vast majority of Wills contain provisions that most people think are completely predictable. However, people are not going to find out about that packed into some poor lawyer’s office, waiting with bated breath as that lawyer reads the Will aloud.

You don’t inherit money from somebody that you murder.

With apologies to Jessica Fletcher, (to whom I was subjected in syndication for many years as a child), not everyone who murders somebody is doing it for the life insurance money. If they were, they’ve got some real bad news coming. New York — like almost every jurisdiction I can think of — has something known as the slayer statute which prohibits people who have criminal culpability in causing the end of someone else’s life, i.e., murdering them, from collecting any inheritance under a life insurance policy, retirement account, or as a beneficiary under the Will.

However, for those of you that don’t want to give up your bad police procedurals, there is an exception for deaths that are accidental. So if at the end of a 60-minute show, you’ve managed to fool the protagonists into thinking that your homicide was actually a suicide, you may still inherit the money. But please don’t go around murdering people!

No client walks into a lawyer’s office and is before a jury the very next day.

We’ve all seen this before. Client comes into lawyer’s office. Lawyer gives them a reassuring smile and tells them that they will have their day in Court. And there’s a quick fade away and the very next day (or even sometimes the same afternoon if the characters’ wardrobe is any indication), they are before a fully assembled and picked jury to decide all of the legal issues in the case.

While the Surrogate’s Courts in New York State are very often quick and efficient, this is completely unrealistic when it comes to a timeline for getting your case before a Court. Prior to anything else happening, you would need to:

– send notices to beneficiaries, and

– likely have an Executor or Administrator get preliminary or temporary Letters to manage the Estate assets.

There would also be demands for discovery, and certainly, depositions, and perhaps even several attempts to resolve the case.

If, for example, I were to file the probate papers in late 2019, and if someone were to challenge probate, in the best case scenario we might be looking at seeing a probate jury at some point in late 2021 — or, more realistically, sometime in 2022. The wheels of justice are slow, but ultimately the Court will hear all the issues before it. But certainly not the same day!

Thank you for taking a minute to deal with my neuroses and allow me to vent about what I see on television and how it relates to what I do — which is still actually quite fascinating — but slightly unrealistic when it comes down to the televised version of my day-to-day practice.

For more information on this topic, or to share a chuckle with me about this, please contact me.