Is a Deathbed Will Necessarily a Bad Thing? 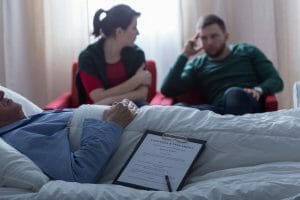 {Read in 4 minutes}  A lot of people make a big deal about the time that passes between when someone signs their Will and when they ultimately die. For example, if someone signs a Will many, many years before they die, people may try to convince the Court that the person wrote the Will at a time when they clearly had the mental capacity to do so.

There seems to be an underlying implication here that people lose capacity as they get older and older, which frankly, is only true in a small percentage of cases. However, this is a very helpful card to play when someone is contesting a Will, trying to convince the Court not to admit the Will to probate.

Conversely, a litigant in a Will contest will often try to convince the Courts that the so-called deathbed Will — signed only a few days or perhaps a few hours before the person died — is somehow invalid because it was signed so late, at a time when a person may not have had capacity. Again, we see the assumption here that people lose capacity as they age — and again, not particularly true.

Is there an inference that Wills signed upon death’s door are invalid? Well, certainly not under the law. Under New York State law, the only thing that matters is whether or not the person signed the Will in conformance with the formal requirements. These include:

– The person signed it at the end;

– They signed it in front of two, disinterested people who served as witnesses;

– The person identified the document that they signed as a Will when asking the witnesses to sign as witnesses.

Just like an old Will doesn’t go stale, there is no amount of time that a Will needs to mature or ferment in order to become valid. If somebody has capacity and validly executes a Will 10 minutes before they die, the Court will admit it to probate.

In my experience, there are a diverse set of prompts that lead people to sign Wills. Sometimes they are inclined to sign them when they become parents, or if they have recently received some bad health news. Or if they have reached a certain age where they feel that it is important that they have a Will, an adulting checklist, if you will. However, when people believe that they are not long for this world, it is overwhelmingly likely to put them in the mood to get their affairs in order. A person who’s in their 70s or 80s, who has avoided doing a Will their entire lives, is incredibly disposed to sign a Will when they get the news that they going on hospice care. Again, it’s important and comforting to them that they get their affairs in order. They would probably want to sign a new Will simultaneously with a:

Living Will, and perhaps a

In conclusion, don’t believe the hype. So long as a person has the capacity to sign a Will and they sign it properly, the deathbed Will is perfectly valid under New York State law and will hold up in a court of law.